Erick is a sophomore at Arizona State University, where he is majoring in Computer Science. His Earn to Learn 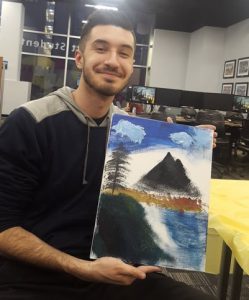 scholarship has made it possible for Erick to study abroad in Spain this summer, and he’s looking forward to an immersive experience that will help cement his bilingual skills. A member of both the Software Developers Association and the Artificial Intelligence Club on campus, Erick plans to get a job after graduation in a computer related field but is leaning toward artificial intelligence. As a Computer Science major, he believes that the world is his oyster, and with 100 paths to take, any would be a fantastic adventure. In his spare time, Erick plays guitar and enjoys recreating Bob Ross paintings.

Site Created by Single Focus Web. Websites That Work For Nonprofits. Earn to Learn is a registered 501(c)(3) charity. Copyright 2017.