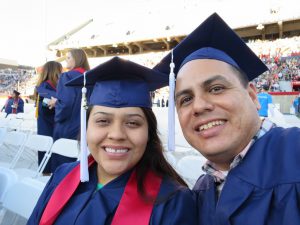 Frank Meza grew up in Tucson. The oldest of four children, Frank was the first person in his family to attend college.

He registered at Pima Community College right out of high school and received a Pell Grant that provided him with $1,500 for living expenses. “I had never seen that kind of money,” Frank recalls. Within a matter of weeks, the money was gone and Frank left school to work for his family’s construction business. “I had not learned to take school seriously. My attitude was the problem back then.”

Fifteen years later the construction industry was devastated by the economic downturn and Frank was concerned about the future of his family’s business and the prospect of working an intensely physical job into his ’40s and ’50s. At the age of 36, he returned to college determined to find a career he would enjoy more than construction — one that would ensure financial security for his future.

Frank applied to Earn to Learn as he was transferring to the University of Arizona for his junior year. When he first met Kate Hoffman at an enrollment event, he was nervous about being an older student at the UA.

“Kate was inspirational to me. She helped me get over my fear and be honest with myself.”

Frank appreciates the financial education component and how Earn to Learn fosters accountability for students’ short and long-term goals. He was able to lay the groundwork for homeownership in his personal financial planning sessions with his success coach and really appreciated the encouragement and support he received.

“I wish I had had Kate and Earn to Learn the first time I went to college.”

One of the first graduates of the Earn to Learn program,  Frank has influenced several family members and friends to pursue higher education. Thanks to Earn to Learn, Frank received his bachelor’s degree in May 2015 and is excited for the future.

Site Created by Single Focus Web. Websites That Work For Nonprofits. Earn to Learn is a registered 501(c)(3) charity. Copyright 2017.